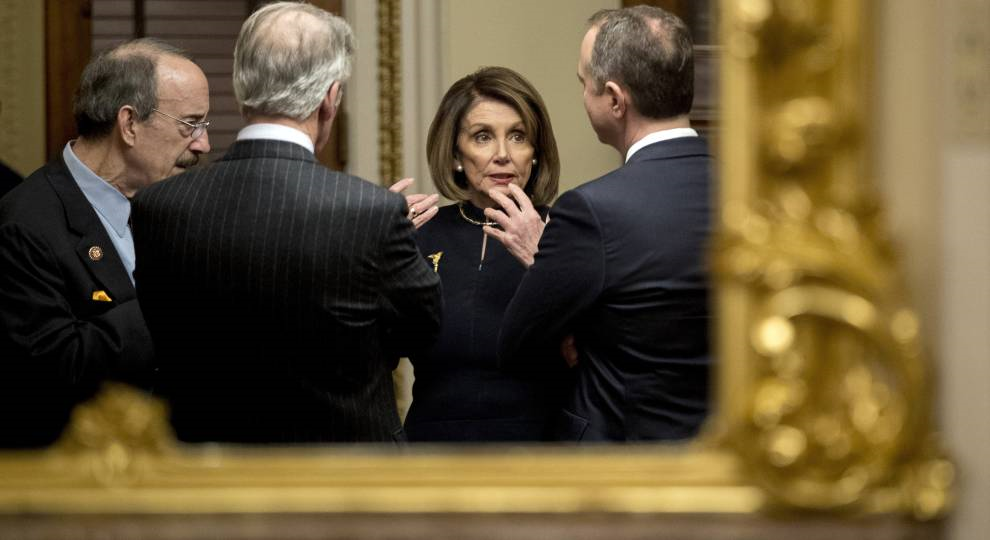 The democrats are worried. That’s what it would appear like anyway after seeing Speaker Nancy Pelosi and Congressman Adam Schiff in a corner of the Capitol. The two looked to be having a heated argument after Trump’s defense counsel took the floor.

According to reports, Schiff is reportedly FURIOUS At Nancy Pelosi for being handed such a horrible case for impeachment against President Donald Trump. Congressman Adam Schiff made his opening arguments on the floor of the Senate last week to a lacklust fanfare. For someone like Schiff who takes great pride in being the star of the courtroom, to be given a losing case would not go over well.

The reason for the report of his anger stems from a photograph of him in the halls of the Capitol a with Nancy Pelosi where he is seen arguing and admonishing her. Reports and sources say that he was arguing with her over the impeachment proceedings.

The Trump defense team has “knee-capped” Adam Schiff this week. That’s according to Senator Rick Scott of Florida who made the proclamation on Neil Cavuto.

Trump’s defense counsel began their arguments last week in a very thorough and laid out defense of the President. They argued that what Trump did was not illegal, that the Democrats rushed impeachment through the house, that other Presidents have withheld aid, and that democrats cheered when impeachment passed.

The arguments were much more compelling for audiences compared to Adam Schiff’s “boring” arguments, as even some liberals have said.

Trump’s all star lawyer though is with out a doubt Jay Sekulow, who is making headlines with his dapper dress and calculative arguments.

Senator Rick Scott, the former governor of Florida and now a US Senator, went on Fox news and also made a startling but very convincing accusation during the same program with Neil. That the entire impeachment scandal is really an elaborate way to pull democrat senators Elziabeth Warren and Bernie Sanders off the campaign trail.

“I think I’ve come to the conclusion why Nancy Pelosi held the articles of impeachment for 33 days. This whole thing has helped Joe Biden. I mean all this is to keep Bernie Sanders, Elizabeth Warren off the campaign trail and help Joe Biden,” Scott said to Fox News host Neil Cavuto.

“I think the White House counsel showed that there was no due process in the House,” Scott said.

He went on to say that the white house counsel “knee-capped” Adam Schiff in their opening arguments. Trump’s defense attorney is making waves for his defense tactics that have impressed even Trump opponents.