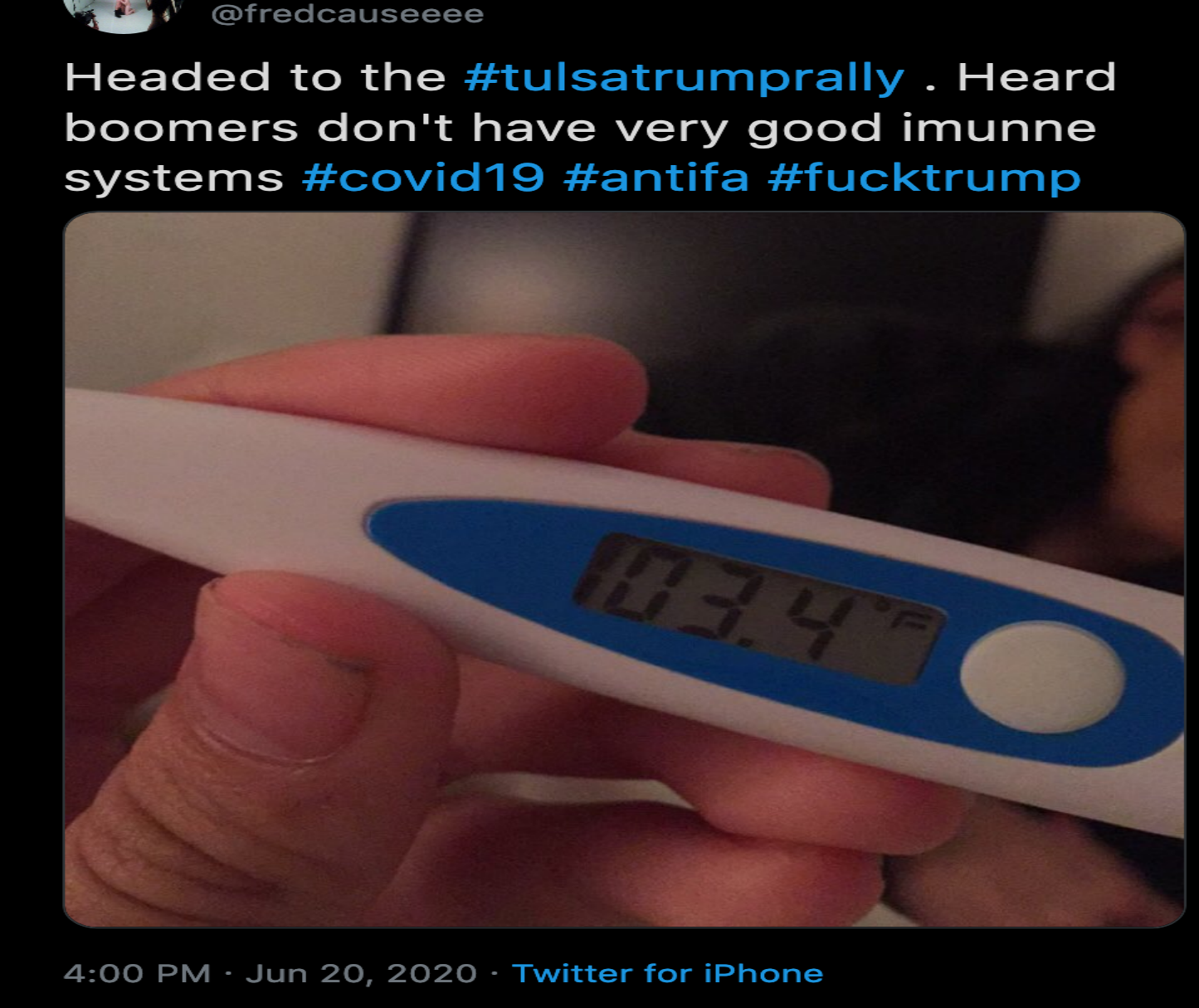 Tulsa, Oklahoma – For the first time since March, Donald Trump had a campaign rally in Tulsa, Oklahoma.
Between the pandemic and recent riots, tensions ran high in the state that recently changed their state slogan to Imagine That! Though ANTIFA has shown that they will go to any length to promote their “anti fascist” agenda, no one could have imagined this.
Social media is buzzing with claims that members of ANTIFA have been encouraging members actively infected with Covid-19 to infiltrate the Trump rally in Tulsa. Though some have speculated that these claims were made by those against ANTIFA in order to further tarnish the organizations already bad reputation, further evidence has emerged, and the evidence is damning.
In a tweet shown below from an account that has since been removed, an active ANTIFA member shows a photograph of his temperature, reading in at 103 degrees.
“Headed to the Tulsa Trump Rally.” A user known as fredcauseee wrote. “Heard boomers don’t have good immune systems.” The ominous tweet was followed by hashtags about Covid19, ANTIFA, and offensive displays of distaste for our President.

Though the tweet and corresponding account have since been deactivated, the user had been tweeting about being ill with Covid-19 over the last few days.
Other members of ANTIFA have shown their support for the menacing plan of action by making similar posts on social media nationwide.

The World Health Organization has stated that the high fevers associated with Covid-19 can be easily masked by taking a simple NSAID, such as Ibuprofen. Even with “fever screenings” at events being held around the country, the screenings are not fool-proof due to readily available fever reducing over the counter medications. With a sea of unmasked faces behind our commander in chief at the Tulsa rally today, the potential devastating consequences of ANTIFA’s inhumane actions are nightmarish.
“Even if someone couldn’t get inside the rally, there were crowds outside. It only takes one person to make everyone else sick.” said a Trump supporter in response to ANTIFA’s horrifying plan.