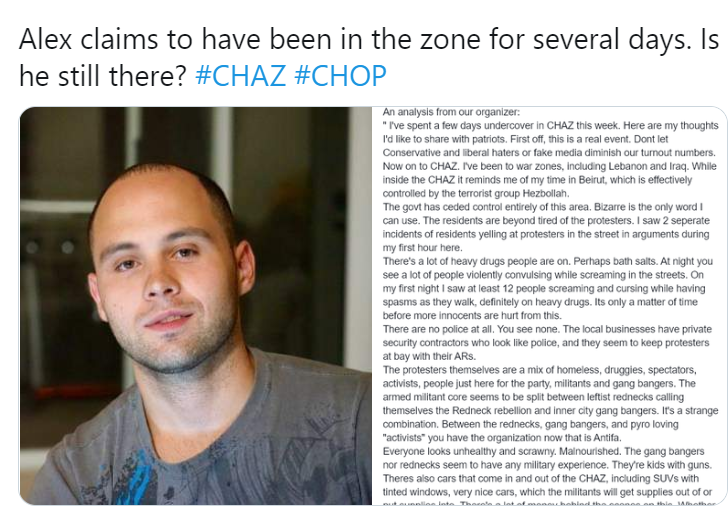 Op-ed from the owner:

Three weeks ago I became very outraged. I was outraged at the vicious authoritarian Marxist tyrants that were wearing masks and destroying the fabric of our country. So I did two things to make a stand. The first was have prntly start the biker event to retake CHAZ on July 4th. The second was to begin exposing them. By taking this stand I would unleash the full force a vicious terror group that is operating throughout the shadows of every city in America.

Antifa stands for Anti-facist, but it is far from what the name contends. The group has zero tolerance for private property of individuals, or even the personal rights of those it disagrees with. It labels anyone who does not support it’s radical ideology as fascists, and by doing so, deems them deserving of threats, harassment, destruction of their property, and violence against them personally. If you have different beliefs than them, then you are a target. Your property is a target. Your privacy is a target. Even your family is a target. They are radical fanatics who go against everything the constitution contends.

They have demonstrated what their solution is on dealing with those who are independent, moderate, conservative and even democrats not liberal enough for them. It is terror, molotov cocktails, metal batons, fists, and guns. They use slogans like ACAB (All Cops Are Bastards) and wear masks. They are the ISIS of America. The modern Ku Klu Klan for the left. They have targeted me simply for turning the power of the pen towards the goal of unmasking them. They used their sympathetic members of tech tyrant companies to fill our media company’s Wikipedia page with slanderous lies. They have gotten me deleted from Facebook. And now they have put out full fledged lookout bulletins for me, and attempt to post as much personal information about me as they can, in attempts to have me attacked or killed. Just look at what they did to journalist Andy Ngo for exposing them. They have done it to others before who challenge them simply by writing of their deeds.

This is America’s public enemy number one.

Here’s a lisst of all the Antifa Exposed articles we’ve done so far: