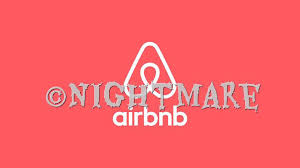 We have seen many Airbnb nightmare stories on social media and the news, but this one takes the cake. A woman in Colorado was hosting a guest who turned out to be wearing an ankle bracelet, and was recently released from prison. When she started to become nervous about the guest, Ty Feller of Colorado, he brought an aggressive pitbull to the Airbnb without her permission to intimidate her. And here’s where the story gets crazy.

After she asked him to leave, he booked another two weeks on airbnb, and left her a bad review on his first reservation. The woman canceled the new upcoming reservation for his extension, and received a $100 host penalty from airbnb for it. She contacted Airbnb by phone to bring up her fears, but the airbnb rep, “Charmaine,” told her that she would have the fine and penalty remain because she canceled him as a host against airbnb rules, and her fears and concerns about his ankle bracelet or pitbull didn’t matter.

The rep spoke with the guest, who told airbnb that the pitbull was his emotional support animal, and airbnb told the host that she has to keep the guest in the house because of this.

It gets worse. The host continued calling airbnb, asking that the guest is removed, but airbnb agents continued telling the helpless woman that she must keep the parolee in her home, even though she was practically in fear for her life.

After calling and messaging into the early morning and getting nowhere, she finally gets a message at 5am from airbnb where the agent says that they’ll end the reservation early, but only if they hear from here before the agent’s shift ends. By the time the host woke up at around 8am and saw the messages, the rep had messaged her that she never answered in time, so the reservation would remain.

Just yet another warning as to the disasters of airbnb and the dangers of hosting on the platform.