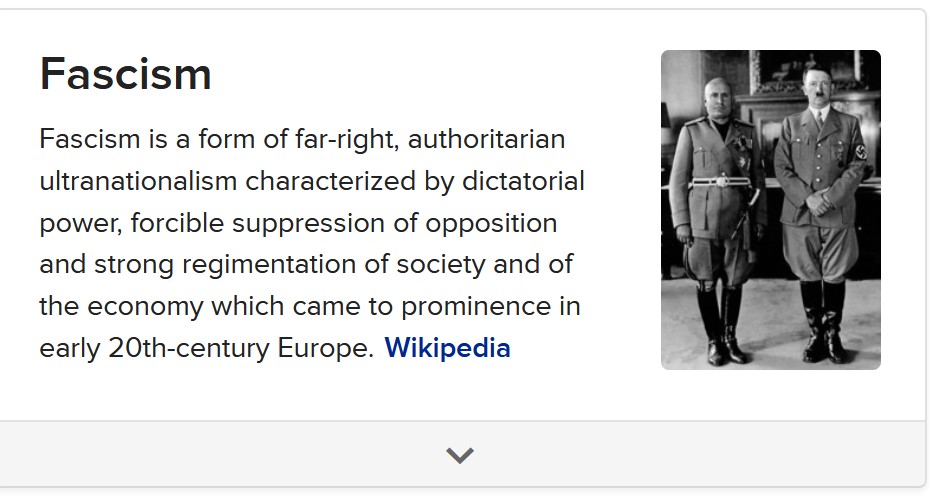 Fascism is a word that goes back about a century, with an established definition amongst historians. Mariam Webster calls Fascism “A political philosophy, movement, or regime (such as that of the Fascisti) that exalts nation and often race above the individual and that stands for a centralized autocratic government headed by a dictatorial leader, severe economic and social regimentation, and forcible suppression of opposition. How to use fascism in a sentence.”

Dictionary.Com calls it “a governmental system led by a dictator having complete power, forcibly suppressing opposition and criticism, regimenting all industry, commerce, etc., and emphasizing an aggressive nationalism and often racism.”

What Wikipedia first said about Fascism before it became co-opted by left biased editors was very accurate, stating “The authoritarian political movement founded by Benito Mussolini in 1919. The name comes from fascio, which may mean “bundle”, as in a political group, but also fasces, the Roman authority symbol of a bundle of rods and axe-head.”

It evolved over the years to then be more detailed:

“Fascism (in Italian, fascismo), capitalized, refers to the authoritarianpolitical movement which ruled Italy1922–1943 under the leadership of Benito Mussolini. The name comes from fascio, which may mean, “bundle”, as in a political group or a nation, but also from the fasces (rods bundled around an axe), which were an ancient Roman symbol of authority. The Italian ‘Fascisti’ were also known as Black Shirts for their style of uniform incorporating a black shirt.”

But now with wikipedia being well established as a left wing website, editors for the site couldn’t help but make their own revised definition of Fascism.

“Fascism is a form of far-right, authoritarian ultranationalism characterized by dictatorial power, forcible suppression of opposition and strong regimentation of society and of the economy which came to prominence in early 20th-century Europe. The first fascist movements emerged in Italy during World War I, before spreading to other European countries. Opposed to liberalism, Marxism, and anarchism, fascism is placed on the far right,”

Though historians and dictionaries consider Fascism to be a political ideology or system that ranges beyond the political spectrum of left and right, and some unbiased editors even tried making this point in discussions on the definition, the senior wikipedia editors have taken it upon themselves to ignore this and falsely equate right wing politics with fascism.

Meanwhile, on the communist page, Wikipedia lists a much softer and forgiving definition:

” Communism is a philosophical, social, political, economic ideology and movement whose ultimate goal is the establishment of a communist society, namely a socioeconomic order structured upon the ideas of common ownership of the means of production and the absence of social classes, money and the state. Communism includes a variety of schools of thought which broadly include Marxism and anarcho-communism as well as the political ideologies grouped around both, all of which share the analysis that the current order of society stems from capitalism, its economic system and mode of production, namely that in this system there are two major social classes, conflict between these two classes is the root of all problems in society and this situation can only ultimately be resolved through a social revolution.”