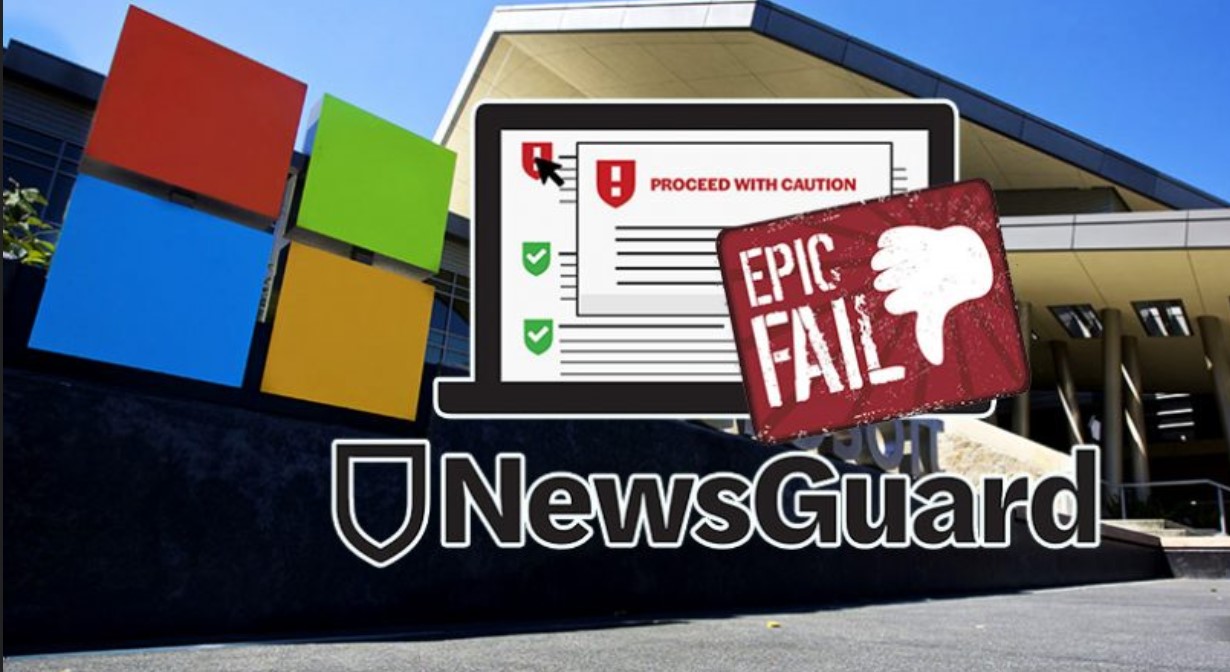 Today, Newsguard, a liberal website that pretends to be an unbiased judge of fake news, attempted to attack Prntly. Newsguard is a liberal company based in New York City, staffed by leftwing employees and owned by liberal lawyer Steven Brill and Wall Street professional media executive Louis Gordon Crovitz.

Though on it’s face Newsguard appears to be bias, they are in fact an unreliable mess of misinformation meant to push a big brother police state of acceptable vs unacceptable news.

The site has labeled infowars, RT, and wikileaks as unreliable. They also deem Prntly as unreliable, because of a number of articles that the left said was fake, but which turned out to be true. Most telling of all about Newsguard though is that they label Washington Post and MSNBC as reliable.

Newsguard’s green badges spread the false information on the Covington High School student to millions of people, while their news outlets labeled red badge were publishing the accurate information.

And when New York Times wrote falsely that a black girl in Texas was shot and killed by a white man, spreading racial tensions and fueling fires, news outlets labeled red badge by Newsguard attempted to spread the correct news, that the shooter was in fact black. This information did nothing to New York Times’ green badge in the eyes of Newsguard.

For Prntly’s case, they labeled us unreliable after contacting us earlier in the year about our published articles on the China Virus being made in a lab in Wuhan. They are adamantly shilling for China here, protecting China from this news story. Just this morning ironically though, the Sun reported that the lead investigator for the WHO (an organization itself funded heavily by China and in the CCP’s pocket) is now even saying that the virus may well have come from the Wuhan lab.

“THE WUHAN Institute of Virology is the highest security lab of its kind in all of China – and can be found right at the heart of the origins of the global pandemic.

Various theories have been swirling about the lab, which is headed up by Chinese scientist Dr Shi Zhengli, known as “Bat Woman”.

Most scientists do not believe the virus leaked from the lab, and the lab itself has categorically denied the claims.

The lab specialised in bat-borne viruses and had been carrying out experiences on them since 2015.

Airlocks, full body suits, and chemical showers are required before entering and leaving the lab – the first in China to be accredited with biosafety level 4 (BSL-4).

BSL-4 labs are the only places in the world where scientists can study diseases that have no cure.

Scientists from the lab even tested a mysterious virus which killed three miners 1,000 miles away in Yunnan province back in 2012.

It has been suggested this fatal mystery bug may have been the true origin of Covid-19.

Experts at the lab also engineered a new type of hybrid ‘super-virus’ that can infect humans in 2015, according to medical journal Nature Medicine

Despite fears surrounding the research, the study was designed to show the risk of viruses carried by bats which could be transmitted to humans.

There is no suggestion the facility’s 2015 work is linked to the pandemic.

The lab was also recruiting new scientists to probe coronaviruses in bats just seven days before the outbreak.

China has began tightening security around its biolabs with President Xi Jinping saying it was a “national security” issue to improve scientific safety at a meeting last February.

Somehow though, reporting on this information is considered unreliable and fake information. Newsguard even seems to be heavily obsessed with it. They focus on news sites that report information about the Wuhan lab more than any other one topic. They have contacted Prntly a few times over it, whenever Prntly writes an article about the Wuhan Lab.

but almost a year ago, Mike Pompeo himself was saying that there was enormous evidence the virus came from a lab. (This was considered fake news and enough to be labeled unreliable by newsguard).

WAPO, like Newsguard, has been spreading misinformation as well to the public though that it’s extremely unlikely, or outright fake news, that covid-19 came from a lab.

Breitbart did a piece on Newguard as well, after Newsguard labeled Drudge Report fake news. All Drudge Report does it repost the news from others, and in the rare occasions it posts something itself, it’s to break news that ends up being true. Drudge Report is coveted by politicians from both sides of the aisle for their endorsement and support. But Newsguard has deemed them unreliable.

Most telling of all though is that Newsguard gives liberal Bezos mouthpiece Washington Post a Green badge for reliability. This needs no elaboration.

Remember all the times the main stream news reported on the Stormy Daniels scandal with Trump as real? When she came out admitting she made it up, the media that spread the fake news was nowhere to be seen.

Here’s the exchange between Newsguard and Prntly: