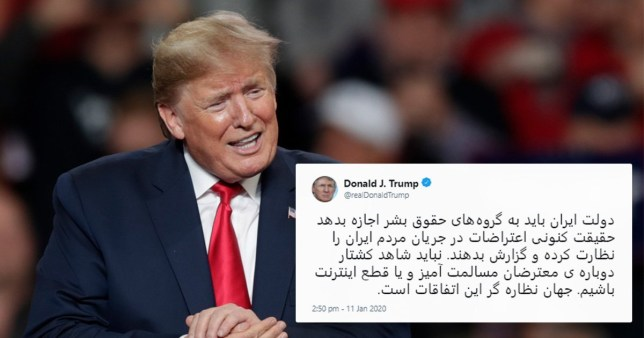 President Trump made Iranian history, but not for the reasons you might think.

The President tweeted words of support in the Iranian language of Farsi to iran encouraging their protests, and stating that the world is watching. The tweet broke Iranian twitter history; over 300,000 likes and 80,000 retweets since Sunday.

The words of the tweet said: “To the brave and suffering Iranian people: I have stood with you since the beginning of my presidency and my government will continue to stand with you. We are following your protests closely. Your courage is inspiring.“

Iranians flocked to twitter in support of the President.

“Thank you, Mr. President of the Iranian people today, once again proving that they hate this regime, the Revolutionary Guards and, in particular, Qassim Soleimani.” Said one iranian response.

But some liberal twitter activists had negative replies to give.

A Democrat from Florida named David Wasserman bashed President Trump’s tweet, except he did it in arabic, which many iranians were quick to point out was not the language of Iran.

Overall, the response from those who the message was geared towards, the Iranian people, was overwhelmingly positive.